Middle and lower level officials and panchayat secretaries in Tamil Nadu have found the central government-funded housing scheme for the poor, Pradhan Mantri Awas Yojana (PMAY), the perfect fit to swindle money big time. By enrolling people ineligible for the benefits or by getting signatures of those already owning houses, officials have pocketed at least 50% of the total allocation. 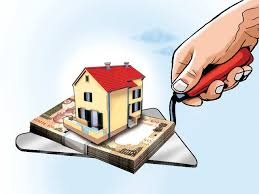 By enrolling people ineligible for the benefits or by getting signatures of those already owning houses, officials have pocketed at least 50% of the total allocation.

A test case is Thalayamangalam village in Tiruvarur district. Officials claimed to have ‘constructed’ 275 houses under PMAY in this tiny hamlet; However, many exist only on paper. The scheme envisages payment of up to 1.7 lakh to beneficiaries with the sum released in four phases in line with the stages of construction.

P Masilamani, former president of the Thalayamangalam village and MDMK union secretary, was among those who exposed the scam in July.

He said the loot had taken place between October 2016 and December 2019, when elected representatives were not administering local bodies and block development officers (BDOs), panchayat secretaries and overseers directly implemented the PMAY scheme.

After the beneficiary submits copies of documents such as house site patta, Aadhaar card, ration card and bank passbook along with their application, allocation is made on the condition that they should complete foundation work with their own money. The first instalment of 26,000 is credited to the beneficiary’s account and the rest is sanctioned in four phases.

However, instead of crediting funds to the beneficiaries’ accounts, the money was diverted to other account numbers which the officials gave the banks. These accounts belonged to either ineligible beneficiaries who were in collusion with officials or, in some cases, to those deceased, whose documents the officials misused.

Absence of elected local bodies gave a free hand to government officials to indulge in indiscriminate corruption, not merely in PMAY scheme, but in many others, said Masilamani, who was village president from 2011 to 2016. “If village presidents were around, such a scam would not have happened. I don’t claim elected representatives will maintain complete transparency. But the scale of corruption would not have been so huge,” he said.

As bank officials don’t cross-check the account numbers given by officials, they could submit account numbers of their conspirators, Masilamani said, adding that ineligible beneficiaries got about 3,000 to 4,000 of the 26,000, while officials pocketed the rest.

The case of retired sub-inspector K Jeyachandran of Thalayamangalam is a telling example of how PMAY funds was swindled in the name of the dead. “My brother Jeyachandran died in 2018. He was also ineligible to be a beneficiary because his is not a below-povertyline family. It’s a mystery how they caught hold of his documents,” said K Ambikapathi, a resident of the village.

Four officers in Mannargudi block of Tiruvaur district were suspended when the scam was busted. A BDO was issued a memo seeking explanation for his alleged role in the scandal.

Ponniyin Selvan, assistant project officer (APO) of DRDA in Tiruvarur, said the collector has instructed all BDOs to check if such irregularities occurred in other villages. “We are yet to get responses,” he said.

Officials also deliberately avoided analysing the financial background of beneficiaries. “Officials have to enter details on different stages of completion of the building into the system before the deadline so the fund will be sanctioned. In case a ‘beneficiary’ fails to comply with the conditions, officials fake entries to siphon off money,” said the APO.

Similar scams were reported in other parts of TN. There were also instances of the government allocating funds, but it did not reflect in the beneficiaries’ accounts.

K Muthukumar of Aladikadu in Pudukottai district alleged that the PMAY scam rocked 35 village panchayats in Avudaiyarkoil union recently. In most of the 192 cases for which money was allotted, houses were not built, he said.

Ilamvazhuthi, a retired employee of a cooperative printing press and resident of Karanthai in Thanjavur, exposed the mockery of the PMAY scheme, revealing an appreciation letter from the government. The irony lay in the fact that he had neither applied for the loan nor did he have any land in his name for constructing a house. He recalled that some locals got his signatures on an application a year back.

Corrupt officials have not spared even tribals. Of the 739 houses sanctioned under scheme in Jawadhu hills in Tiruvannamalai district, 353 applicants were ineligible. Officials collected 10,000 to 15,000 from each ineligible beneficiary. Seven of 11 panchayat secretaries in Jawadhu hills who collected money were placed under suspension last year. Sixteen more officials are facing charges. Similar loot was reported in Veerappanur and Kovilur panchayats also in Tiruvannamalai district.

These instances underline the intensity of the scam that is yet to be fully revealed and could cover almost all villages in the state.

Tiruvarur district secretary of CPM G Sundaramoorthy blamed the greed of government officials for the genesis of the corruption.

Advocate A Anandharaj of Mannargudi said, “The Centre, after launching a people’s welfare scheme, does not care about its effective implementation. The government is running on money from taxpayers. So, it should track spending under every scheme. It should form national and state-level committees to monitor all schemes.” Like in the case of PM Kisan scheme fraud, a CBCID probe should be ordered into PMAY scams in other parts of the state, he said.