Structural retrofitting and strengthening by Jacketing 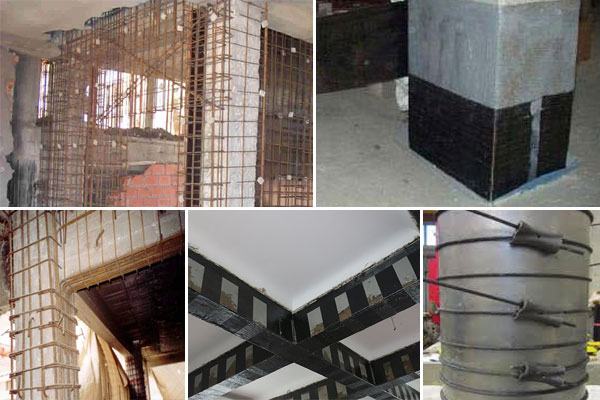 Jacketing is a method of structural retrofitting and strengthening It is used to increase bearing load capacity following a modification of the structural design or to restore structural design integrity due to a failure in the structural member. This technique is used on vertical surfaces such as walls, columns and other combinations such as beam sides and bottoms. It consists of added concrete with longitudinal and transverse reinforcement around the existing column. Jacketing is the process whereby a section of an existing structural member is restored to original dimensions or increased in size by encasement using suitable materials. A steel reinforcement cage or composite material wrap can be constructed around the damaged section onto which shotcrete or cast-in-place concrete is placed.

Jacketing is particularly used for the repair of deteriorated columns, piers, and piles and may easily be employed in underwater applications. The method is applicable for protecting concrete, steel, and timber sections against further deterioration and for strengthening. Jacketing improves axial and shear strength of columns and a major strengthening of the foundation may be avoided.

When is jacketing needed?

Jacketing is the process of strengthening weak RCC columns which have deteriorated over some time due to adverse atmospheric conditions or due to poor maintenance of the structure. Other reasons during the construction phase include design errors, deficient concrete productions, bad execution process. During the service life, the need may arise due to an earthquake; an accident, such as collisions, fire, explosions; situations involving changes in the structure functionality; the development of more demanding code requirements.

The strengthening of reinforced concrete members is a task that should be carried out by a structural engineer according to calculations. Here only a few suggestions are included to illustrate how the strengthening could be done. RC columns can best be strengthened by jacketing, and by providing additional cage of longitudinal and lateral tie reinforcement around the columns and casting a concrete ring. Jacketing a reinforced concrete beam can also be done in the above manner. For holding the stirrup in this case, holes will have to be drilled through the slab.

Steel jacketing is also an effective method to increase basic strength capacity. Steel jacketing not only provides enough confinement but also prevents deterioration of shell concrete, which is the main reason for bond failure and buckling of longitudinal bars. Steel jacketing refers to encasing the section with steel plates and filling the gap with non-shrink grout. It is a very effective method to remedy the deficiencies such as inadequate shear strength and inadequate splices of longitudinal bars at critical locations. But, it may be costly and its fire resistance has to be addressed. In practice, the most commonly used strengthening technique is by steel strips and angles. Steel jacketing helps to restore the strength, ductility, and energy absorption capacity of columns thus it seems to be effective in retrofitting columns. And also the steel jacket helps to increase the flexural strength and ductile behavior of the lap-spliced column thus increasing the lateral performance of columns

One of the most commonly used methods for retrofitting is Fiber Reinforced Polymer (FRP) jacketing. FRP is widely used for its properties such as high strength to weight ratio, stiffness, good impact properties, high resistance to corrosion in harsh environmental and chemical condition, and also it causes only a minimum alteration to the geometry of structural elements than other methods FRP is used to strengthen the corroded rectangular columns considering different levels of corrosion and various volumetric ratios and the test results indicate that shear resistance of FRP and column increases with the increase in volumetric ratio and decreases with increase in different levels of corrosion. Shrinkage is one of the factors responsible for the formation of cracks in structural elements like beams and slab. To reduce the shrinkage hybrid fiber-reinforced polymer (FRP) reinforced shrinkage compensating concrete is used.

The application of composite materials for jacketing has been developed in strengthening and retrofitting of concrete structures through recent years so that many concrete structures would be strengthened by these materials. One of these applications is Glass Fibre Reinforced Polymer (GFRP) material used in strengthening and retrofitting of reinforced concrete columns. The design of glass-fiber-reinforced contains basic properties under tensile, compressive, bending and shear forces, coupled with estimates of behavior under secondary loading effects such as creep, thermal response and moisture movement. Glass fiber-reinforced concrete consists of high-strength, alkali-resistant glass fiber embedded in a concrete matrix. In this form, both fibers and matrix retain their physical and chemical identities, while offering a synergistic combination of properties that cannot be achieved with either of the components acting alone. In general, fibers are the principal load-carrying members, while the surrounding matrix keeps them in the desired locations and orientation, acting as a load transfer medium between the fibers and protecting them from environmental damage. Glass fibers can be incorporated into a matrix either in continuous or discontinuous lengths.

In the NSM method, grooves are cut into the cover concrete, and FRP bars are placed in the grooves and bonded using an appropriate filler, such as epoxy paste or cement grout. NSM FRP bars are usually used in the longitudinal direction to enhance the flexural strength of the column. Mostly, the NSM method is used in conjunction with externally bonded FRP jacketing, resulting in a hybrid jacketing.

Hybrid jacketing involves a combination of two or more different strengthening methods/materials for enhancing the seismic performance of a column and, thus, benefits from the advantages of both methods. This section summarizes the experimental studies utilizing the hybrid jacketing approach for the strengthening and repair of RC columns.

Shape memory alloys, that are characterized by their superelasticity, durability and shape memory effect have been considered for the strengthening of structural elements by different researchers. Moreover, SMA alloys are considered a more viable solution to FRP retrofitting due to the advantages such as no need for adhesive, easy installation and no danger of peel off.

Concrete Jacketing is pivotal for strengthening to add or restore ultimate load capacity of reinforced concrete columns. It is used for seismic retrofitting, supporting additional live load or dead load that is not included in the original design, to relieve stresses generated by design or construction errors, or to restore original load capacity to damaged structural elements.

Reinforcement of Tunnels with RELinforce™