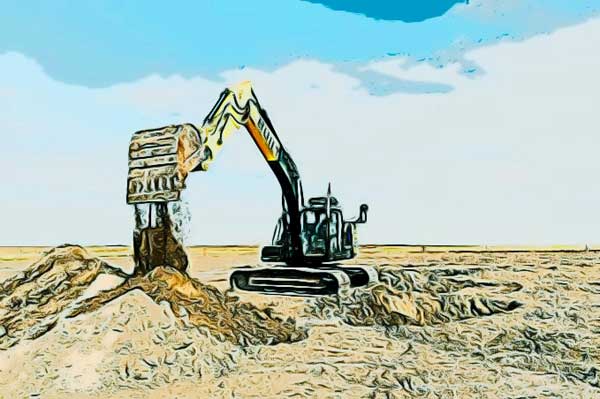 Excavators can be defined as a heavy construction equipment that consists of a boom, dipper (or stick), bucket and cab on a rotating platform known as the “house”. They are hydraulic in nature. All movement and functions of a hydraulic excavator are accomplished through the use of hydraulic fluid, with hydraulic cylinders and hydraulic motors. Due to the linear actuation of hydraulic cylinders, their mode of operation is fundamentally different from cable-operated excavators which use winches and steel ropes to accomplish the movements.

The main uses for an excavator are digging trenches, holes, and foundations, providing the power to do these tasks much more easily and effectively than any other piece of heavy equipment on the market. Given below are some popular types of excavators.

A crawler excavator (or crawling digger) is a tracked vehicle designed to dig or grade, or move earth and large objects, and is classified by its mode of locomotion. The many types of excavators include wheeled, walker, towed and rail excavators. Related to tracked tanks widely used by armies, these crawlers move upon the same rotating wheel systems, but also have the ability to dig, pick and transport excavated materials as they proceed. The crawler excavator components include a major crawler chassis, rotor support, the central swivel joints, turntables, the device weight, the panel, cab and air-conditioners. Crawler excavators are widely used in construction work, such as digging trenches, holes and foundations, as well as for handling materials, moving earth, demolition, dredging, etc. Other attachments adapt the crawler excavator for boring, ripping, crushing, cutting and lifting.

A dragline excavator is a piece of heavy equipment used in civil engineering and Surface mining. Draglines fall into two broad categories: those that are based on standard, lifting cranes, and the heavy units which have to be built on-site. Most crawler cranes, with an added winch drum on the front, can act as a dragline. These units (like other cranes) are designed to be dismantled and transported over the road on flatbed trailers. Draglines used in civil engineering are almost always of this smaller, crane type. These are used for road, port construction, pond and canal dredging, and as pile driving rigs.

A suction excavator produces powerful suction through a wide pipe which is up to 30 centimeters (1 ft.) or so in diameter. The suction inlet air speed may be up to 100 meters per second (220 mph). Its construction is somewhat like a vacuum truck (gully emptier) but with a wider suction hose and a more powerful suction.

The suction nozzle may have two handles for the operator to grasp. Those handles may enable a collar to be rotated, thus uncovering suction-release openings (with grilles over) to release the suction. This will make the suction nozzle drop objects too big to enter the tube. The end of the tube may be toothed. This helps to cut earth when used for excavating. When it is used to suck up loose debris and litter, some types of debris may snag on the teeth. The earth to be sucked out may be loosened first with a compressed-air lance, or a powerful water jet.

A skid steer is a small, rigid-frame, engine-powered machine with lift arms used to attach a wide variety of labor-saving tools or attachments. Skid-steer  are typically four-wheel vehicles with the wheels mechanically locked in synchronization on each side, and where the left-side drive wheels can be driven independently of the right-side drive wheels. The wheels typically have no separate steering mechanism and hold a fixed straight alignment on the body of the machine. Turning is accomplished by differential steering, in which the left and right wheel pairs are operated at different speeds, and the machine turns by skidding or dragging its fixed-orientation wheels across the ground..

A skid-steer can sometimes be used in place of a large excavator by digging a hole from the inside. The skid loader first digs a ramp leading to the edge of the desired excavation. It then uses the ramp to carry material out of the hole. The skid loader reshapes the ramp making it steeper and longer as the excavation deepens. Other applications may consists of transporting raw material around a job site, or assisting in the rough grading process.

Long reach machines are not suitable for the high side twisting forces that can be exerted by demolition attachments and many demolition machines are unstable at large radius – so they are often assisted with electronic cut off devices that restrict the operating radius of the machine. Long reach machines are particularly useful in dredging operations. As its name suggests, a long reach excavator features a lengthier arm and boom sections. The design allows for better operation in hard-to-reach locations. The excavator’s extendable arm can reach over 100 feet horizontally.

There has been development in these machines, namely- The high reach excavator and Ultra high reach demolition excavators.

The high reach excavator is a development of the excavator with an especially long boom arm, which is primarily used for demolition. Instead of excavating ditches, the high reach excavator is designed to reach the upper stories of buildings that are being demolished and pull down the structure in a controlled fashion. It has largely replaced the wrecking ball as the primary tool for demolition. Ultra high reach demolition excavators (UHD) are demolition excavators with several tens of meters of reach. Reaches up to 48 metres (157 ft) are in operation as of 2016. As of 2017 there are UHD machines that can reach 67 meters.

A backhoe is an excavation machine comprised of a standard tractor base that supports a digging bucket on the end of a jointed two-part arm. The opposite side of the backhoe will often have a front loader attachment (in which case the backhoe is technically called a “backhoe loader”), so the seat swivels 360 degrees to allow the operator to face whichever side is being used at the time.

The part of the backhoe arm that’s attached to the tractor is called the boom, and the segment that holds the digger bucket is called the dipper or dipper-stick. The pivot that connects the boom and dipper is called the king-post. There is a wide variety of attachments available for a backhoe, like drills, hammers, rippers, rakes, breakers, and more. The front loader can also be replaced with different brooms, plows, and forklifts. In some cases, a backhoe can even serve as a crane by looping the straps of a lifted object over the dipper stick.

Backhoe excavators are backhoe loaders with an excavator boom attachment on the back of the machine. On the front of the backhoe is a large bucket or blade used to push, level and move soil and other materials. The excavator arm on the rear of the backhoe functions the same way as a standard excavator, except rather than rotating a full 360 degrees, backhoes only rotate 200 degrees.

Power shovel consists of a revolving deck with a power plant driving and controlling mechanisms, sometimes a counterweight, and a front attachment, such as a boom or crane, supporting a handle with a digger at the end. The whole mechanism is mounted on a base platform with tracks or wheels. Power shovels are used principally for excavation and removal of debris.

Mechanical cable-operated shovels apply engine power to the base and to the attachment by means of clutches, gears, shafts, winch drums, and cable. Electric cable-operated shovels have several electric motors supplied with current by a power line, or more rarely, by a deck-mounted generator, replacing the engine and most of the clutches, gears, and shafts of the mechanical shovel. Hydraulic shovels have engine-driven pumps to provide pressure for rams and motors. Mechanical shovels may include some electrical or hydraulic functions.

A mini excavator is a tracked or wheeled vehicle with an approximate operating weight from 0.7 to 8.5 tonnes. It generally includes a standard backfill blade and features independent boom swing.Mini excavators are tracked machines about the same size as a typical skid-steer but they serve a very different purpose.  They include a heavy-duty arm that interfaces with a wide range of attachments (although most frequently shown with a bucket) and a mounted blade. To be considered a mini excavator, the machine will usually weigh less than 10,000 pounds, or 5 tons, although this rule is not strictly followed.

An excavator’s design allows the construction equipment to be used for multiple purposes. Hydraulic excavator capabilities have expanded far beyond excavation tasks with buckets. With the advent of hydraulic-powered attachments such as a breaker, a grapple or an auger, the excavator is frequently used in many applications other than excavation. Many excavators feature a quick coupler for simplified attachment mounting, increasing the machine’s utilization on the jobsite. Excavators are usually employed together with loaders and bulldozers. Most wheeled, compact and some medium-sized (11 to 18-tonne) excavators have a backfill (or dozer) blade. This is a horizontal bulldozer-like blade attached to the undercarriage and is used for levelling and pushing removed material back into a hole.

It consists of attachments provide digging and holding functionalities. It also consists of a rotating platform and wheels provide the necessary mobility to lift and remove debris. Excavators use a variety of hydraulic attachments that serve different purposes auger, lamp, and quick coupler.Some of the attachments and parts used in excavator are – Bucket, Augers, Clamp, Coupler, Thumbs, Breaker, Rippers, Hydraulic cylinder, Boom, Cab, Engine, Counterweight and Track Frame.

Excavators have been in use in large and small scale constructions. They are used for small housing projects to do a cut and fill, used in road construction, used in marine structures to place armor and large rocks and has also been used in larger sites to excavate, move construction material, remove construction waste to name a few. There are several types of excavators which are classified on use, brand and purpose.