Yogi Adityanath took part in the 'Griha Pravesh' ceremony for beneficiaries under CM Awas Scheme, and distribution of the first installment to about 34,500 beneficiaries on Tuesday. 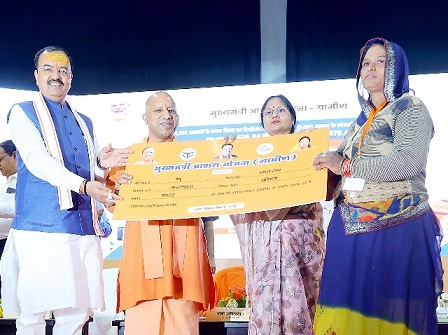 Chief Minister Yogi Adityanath took part in the ‘Griha Pravesh’ ceremony for beneficiaries under CM Awas Scheme, and distribution of the first installment to about 34,500 beneficiaries on Tuesday.

“Before 2017, even ambitious schemes like PMAY remained ineffectively implemented in the state which reveals the ‘real intentions’ previous governments had for the needy and poor. They only divided the society for vote bank, never cared to provide benefits to weaker sections,” he said on the occassion.

“It is our good fortune that on the occasion of Tribal Pride Day, gifts worth more than Rs 905 crore are being provided to the beneficiaries. May it be any government scheme, no one has been allowed to intervene. The process has been kept transparent, all middlemen have been eliminated. All benefits now directly reach the needy,” Uttar Pradesh chief minister said.

“We ensured every beneficiary who remained deprived of benefitting under PMAY is provided shelter under the ‘Mukhyamantri Awaas Sceme’,” he said while slamming the previous government.

So far, 45 lakh poor people, which includes 27 lakh in rural and over 17 lakh in urban are, have been provided homes under the PMAY scheme with utmost transparency, he added.
“PM Awas scheme or CM Awas schemes are not just the mediums to benefit any one beneficiary, it is linked to the campaign under the guidance of PM Modi towards his economic upliftment of the poor and deprived,” remarked Yogi.

He continued: “We provided toilets to over 1.63 crore families in the state on a large scale, conducted fair surveys and provided houses, toilets, gas cylinders, health cover, and protection to daughters.”

Furthermore, the chief minister said that even after 75 years of independence, till about 70 years, the Musahars were deprived of rights.

The Musahars were given voting rights and the government is working for the upliftment of about 54 communities that remained underprivileged after independence, said the CM.

Urging public participation, Yogi said: “It is extremely important for the public to equally work hard for development. The government will continue to provide benefits, however, only with concerted efforts and dedication can a society progress as a whole.”