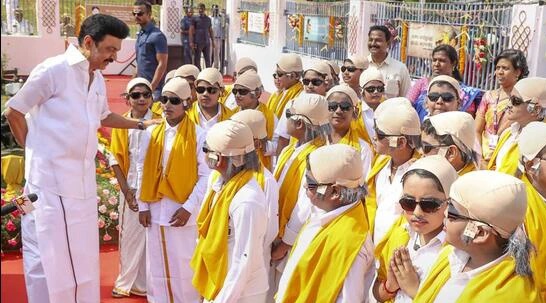 At the inauguration, Stalin said the project was the dream of his late father and former chief minister M Karunanidhi. Karunanidhi launched this scheme in 1997 to promote social justice.

Under the scheme, 40% of the houses were allotted to the Scheduled Caste (SC) community, 25% each for Backward Castes (BC) and the Most Backward Castes (MBC) and the remaining 10% to others. The first Samathuvapuram project was launched in 1998 in the Madurai district.

On Wednesday, Stalin inaugurated a hundred houses built for ₹3.17 crore in Kotai Vengapatti near Kannamangalampatti panchayat in the Sivaganga district. Stalin also unveiled a ₹2.25 lakh worth bust of Periyar (the father of the Dravidian movement E V Ramasamy – after whom the project is named), which is installed at the entrance of this project. “The Periyar Ninaivu Samathuvapuram project is a noble project where people can live equally irrespective of their caste and religion,” said a statement from the government.

After handing over the keys to the beneficiaries, which included people with disabilities, Stalin noted that nine Samathuvapurams were opened by the Karunanidhi in the Sivaganga district alone out of which eight are in use. This present one at Kotai Vengapatti was built in the financial year of 2010-2011, but it was not opened since the AIADMK formed the government in 2011, and the party had ruled the state for the next decade. The Stalin-led DMK government was elected last May.

The community has also been provided with a playground, which includes facilities to play volleyball and kabaddi. A children’s park named after Karunanidhi has also been constructed for ₹5.25 lakh. A ration shop has been set up for the benefit of the residents and an Anganwadi centre. A library building has been built for ₹8.09 lakh, said the government statement.