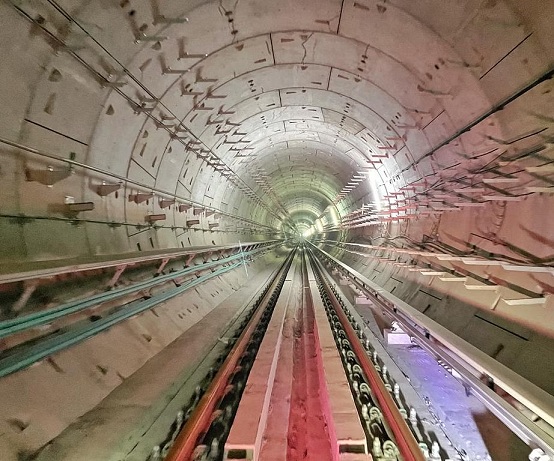 India’s first underwater tunnel, being built under the Hooghly River in West Bengal at a cost of around Rs 120 crore as part of the East West Metro Corridor, will be a blink-and-you-miss-it experience for passengers as trains will cross the 520-metre stretch in just 45 seconds.

The tunnel — the Indian version of Eurostar’s London-Paris corridor — is 13 metre below the riverbed and 33 metre below ground level.

The 520-metre tunnel is part of the East West Metro Corridor of Kolkata — from the IT hub of Salt Lake Sector V in the east to Howrah Maidan in the west across the river.

The tunnel’s construction is complete and is likely to be commissioned in December 2023 after the completion of a 2.5-km stretch between Esplanade and Sealdah on the corridor.

“The tunnel is essential for the East West Corridor and it was key. The under-the-river-alignment was the only alignment possible with residential areas and other technical issues involved,” said Kolkata Metro Rail Corporation General Manager (Civil) Sailesh Kumar.

“This metro route between Howrah and Sealdah cuts down the commute time to 40 minutes as against 1.5 hours by road. It will also ease congestion at both ends,” he said.

It will take 45 seconds to cross the tunnel, he said.

The East West Corridor of the metro rail has been marred by delays and resultant cost escalations. It was approved in 2009 at a cost of Rs 4,875 crore and a completion date of August 2015. According to officials, the cost has now increased to Rs 8,475 crore out of which Rs 8,383 crore has already been spent.

The inner walls of the tunnel are being made with high quality M50 grade, reinforced concrete segments with a thickness of 275mm each. Six of these segments will complete a circular lining of the tunnel’s diameter. The segments are being pre-cast in specialised moulds imported from Korea.

All you need to know about India’s first Underwater metro tunnel:

Of the 16.6-km-long east-west corridor stretch, 520 meters will be under the river bed of the Hooghly river. The tunnel corridor is built 33 meters below the riverbed and will connect Kolkata to Howrah. The tunnel will have 1.4m-wide concrete rings and hydrophilic gaskets to prevent water from entering the tunnel. This metro connectivity will help reduce travel time between Sector V to Howrah. The train will be running at a depth equal to a 10-story structure underwater.

This will be a one-of-a-kind underwater metro train tunnel in India and is expected to be at par with Eurostar which connects London to Paris. The project is expected to decongest traffic and transform lives of the people residing near Hooghly river.

Several protective measures have been taken to prevent water inflow and leakages in the tunnel. Concrete mixes composed of fly ash and micro silica have been used for the segments to minimise water permeability.

The segments are being sealed using a complex grouting process that will fill the space between the segments and the shield of the tunnel boring machine (TBM).

A two-component grout mix, including a slurry made of water, cement and bentonite and sodium silicate, is being used to fill the gaps. The liner segments are fitted with German-made neoprene and hydrophilic auxiliary gaskets, which expand when in contact with water to prevent inflow through segmental joints.

The project is expected to be completed by 2023.