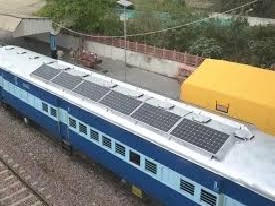 In July 2017, Solar Power Technology was introduced by the national transporter on passenger train running between Sarai Rohila (Delhi) to Farrukh Nagar (Haryana) for meeting the load requirement of lights and fans. So far, as many as 60 passenger coaches have been equipped with solar panels for meeting the power requirements of lights and fans, according to the information given by Railway Minister in the parliament. Besides these 60 passenger coaches, 10 Non-air-conditioned coaches at Mathura to run in the Mathura-Alwar railway section as well as 30 Non-air-conditioned passenger coaches in the Lucknow-Varanasi railway section are to be equipped with solar power technology, Goyal said.

Meanwhile, the Railway Minister also mentioned that Indian Railways provides solar plants at stations based on the technical feasibility and viability. Till date, a total of 79 feasible railway stations have already been provided with solar panels/plants in Madhya Pradesh. At present, there is no proposal to set up hybrid wind or solar plants which will be capable of generating electricity through wind, other than solar energy, he said. Further, the national transporter has plans to progressively provide solar panels/plants at other feasible stations of MP.

The Railway Minister further said that most of the works are being done by private partners under developer mode, in which Indian Railways do not have to incur capital expenditure. For setting up of solar plants, the timeline would depend upon the individual plant capacity, location as well as clearance from the state authorities, he added.