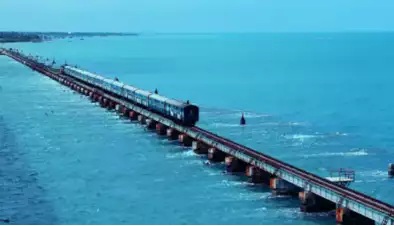 Southern Railway has announced suspension of train operations on the Pamban Rail Bridge till further announcement. All Rameswaram-bound trains will be operated from Mandapam railway station.

The zonal railway had earlier suspended all the train operations till Jan 10, 2023.
In the early hours of December 23, a continuous health monitoring system installed on the Scherzer span of the Pamban Rail Bridge triggered a red alert. The system was installed by Indian Institute of Technology – Madras to monitor the vibrations on the more than 100 years old bridge.

After the red alert was triggered by the system, a team from IIT-M studied the bridge. Senior officials from the zonal railway inspected the bridge. Research Design and Standards Organization (RDSO) of Indian Railways in Lucknow was consulted. The findings by the expert team from IIT were sent to RDSO.

No 06780 Rameswaram – Madurai special train, which is operated as the pairing train of Tirupati – Rameswaram Express, will be operated from Mandapam in this period.