The Lucknow unit of the Enforcement Directorate has started a probe into the alleged Rs 22-crore Delhi-Meerut Expressway scam and has sought documents related to the fraud from the state government. 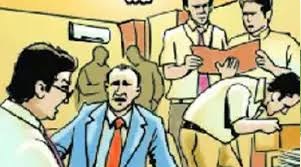 The Lucknow unit of the Enforcement Directorate has started a probe into the alleged Rs 22-crore Delhi-Meerut Expressway scam and has sought documents related to the fraud from the state government.

On the basis of the FIRs lodged by the Ghaziabad district administration, the ED recently registered a case under the Prevention of Money Laundering Act (PMLA).

As many as 12 officials, including an IAS officer, have come under the ED scanner in connection with the scam that had surfaced in 2017 when a group of farmers lodged a complaint with the then divisional commissioner, Prabhat Kumar, who ordered an investigation by a four-member team. The probe committee submitted its report to the government in September 2017.

The ED started its probe on the basis of two FIRs lodged in Ghaziabad in which it was alleged that 12 accused, through a cooperative society which was deregistered in 1999, purchased land along the expressway in 2016 even after the notification was issued in July 2012.

As per norms, the sale/purchase of land is not allowed after a notification is issued under the National Highways Act. Sources in the ED said that the officials involved in the scam first purchased the land from farmers at cheaper rates and then sold it to the government at 10 times higher price.

The ED officials said they would soon send summons to the officials named in the case for recording of their statements. In May 2022, the state government had placed former district magistrate of Ghaziabad, Nidhi Kesarwani, under suspension for her role in the scam. The government had recommended suspension and departmental proceedings against Kesarwani on graft charges.

She had served as the collector and district magistrate, Ghaziabad (land revenue management and district administration) from October 13, 2011, to 13 October, 2017, while on inter-cadre deputation. Senior officials said the action against her would be initiated by the central government. It was revealed in the inquiry that the society, Griha Nirman Samiti, in whose name the lease deeds were executed, had been deregistered in 1999 and the suspected persons created fake societies to pool more land.