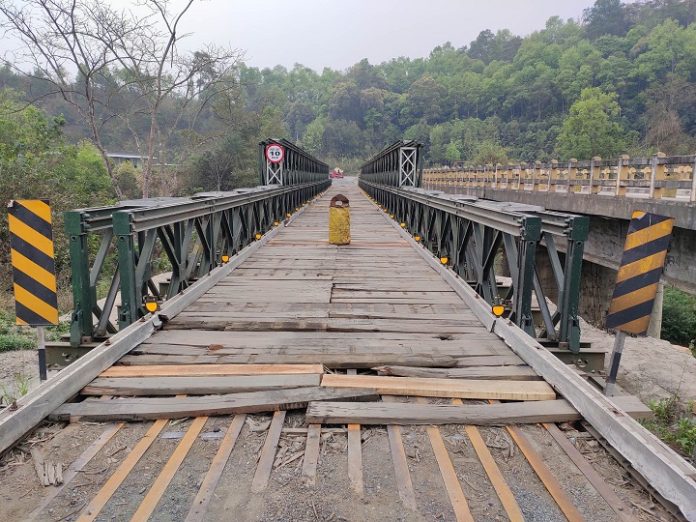 The restriction on movement of heavy vehicles along the Shillong Bypass due to a landslide close to the Dwar Ksuid bridge in Ri-Bhoi will be resolved but it would take the National Highways Authority of India (NHAI) authorities at least 2-3 days to complete the repair job.

Heavy vehicles were ordered not to ply through Dwar Ksuid Bridge along the Shillong Bypass due to the landslip.

Speaking on the matter, NHAI Regional Officer, Sanjeev Sharma, said that work on the portion started since Monday morning, and they are optimistic of completing the work in 2-3 days.

It was also informed that the traffic for light motor vehicles have been rerouted through the bailey bridge.

Informing that an old retaining wall has been damaged, the NHAI official said the bridge is at a height of 10-12 metre, hence it cannot be repaired within a day or two.

It is also important to note that the construction work for a new bridge which will replace the Dwar Ksuid bridge is already on. It is expected to be completed in the next 3-4 months.

Clearing any apprehensions about a possible surge of vehicles in Shillong due to the restriction on the bypass, officials from Shillong Police, on the other hand, have confirmed that the highway traffic is not being diverted to Shillong and that heavy vehicles are stationed in Mawryngkneng.

The Umroi MLA said the inspection revealed that the bridge is no longer safe for commuters.

The matter including the main bridge in Umiam has been raised with the government four years back before the construction of the bailey bridge, he said. But it seems that the government did not take the matter seriously, he added, while recalling that the High Court of Meghalaya had to intervene in the matter.

The MLA said that matters pertaining to the Dwar Ksuid bridge as well as the Umiam bridge have also been raised in the floor of the Assembly.

Had the government taken serious steps in regard with rebuilding the reconstructing the Dwar Ksuid bridge during four-year period instead of the bailey bridge, the matter could have been solved for the interest of the public at large, he said.

He termed the bailey bridge a waste of public money, while recalling the damages incurred since its construction.

On the other hand, the Project Director of NHAI, Anand Singh Chouhan, said the bridge can take the load of only vehicles that weigh below 10 metric tonnes. The work on the retaining wall of the bridge will take another 5 to 7 days to complete, he added.

Chouhan also said that the construction of the new bridge will take another six months to be completed.

It may be recalled that a couple of years ago, the Dwar Ksuid bridge developed cracks after which a bailey bridge was constructed. But even the Bailey bridge sustained damages.

The movement of traffic on the Shillong Bypass frequently gets disturbed due to continued damages to the bridge.