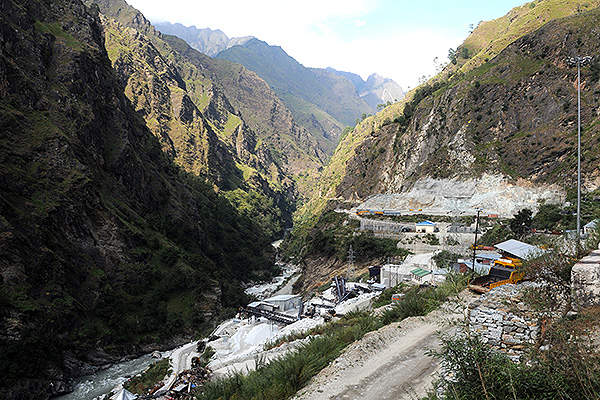 Life constantly presents the greatest opportunity brilliantly disguised as the biggest disaster. Around 178 people are reportedly missing at state-run NTPC Ltd’s 520 MW Tapovan Vishnugad hydropower project site, after a glacier near Raini village above Rishiganga river in Uttarakhand burst. An avalanche near Tapovan in Uttarakhand has damaged a part of an under-construction hydropower project in the region. While rescue operation is on, the situation is being monitored continuously with the help of district administration and police. Of India’s installed power-generation capacity of 373.43 GW, hydropower projects account for around 12.23% or 45.69 GW capacity. The barrage at the NTPC’s project site has been filled with sediment and around 70% of the barrage’s top bridge has also been damaged. It’s feared that three gates of the spillway have been washed away.

The Sunday disaster follows the Sikkim earthquake in September 2011 and Uttarakhand floods in 2013 that had raised questions about India’s hydropower development.  Hydropower has for long been a subject of controversy in Uttarakhand. The state nestles in the ecologically fragile and earthquake-prone Himalayan region, but has unleashed rapid development, much of it driven by hundreds of hydropower projects. In Uttarakhand, as many as 70 hydro projects–existing, under-construction, and proposed dams–are located on two river basins alone – the Bhagirathi and the Alaknanda.

There are reports of multiple ground engineering and environmental factors that might have caused the damage. Some of the important ones are discussed below.

Impact load from glaciers might be a prevalent cause for such damage. An advancing ice sheet carries an abundance of rock that was plucked from the underlying bedrock; only a small amount is carried on the surface from mass wasting. The rock/sediment load of alpine glaciers, on the other hand, comes mostly from rocks that have fallen onto the glacier from the valley walls.Glaciers flow because ice deforms as a result of basal shear stress. In fact, basal shear stress varies across the glacier bed because glaciers do not flow on hard, smooth surfaces. Over a rough bed, some areas will have higher stresses, and some areas will have lower stresses.The molten ice from Himalatan Mountains in their big forms could have hit the structure across the rivers.

Global warming could be an important reason for such a disaster. As the Earth warms, the melt line moves upwards so that the glacier melts faster and faster at the bottom, shortening the glacier and reducing its mass. Ultimately, the melted water flows into streams and rivers and ends up in the oceans, contributing to accelerating sea level rise. The fact that temperatures on  mountains are rising faster than the globe as a whole is something predicted by climate models. The reason it warms so fast in these locations is that as the warming starts, snow begins to melt, exposing dark soil, which absorbs more sunlight, leading to more warming.  Because glaciers are so sensitive to temperature fluctuations accompanying climate change, direct glacier observation may help answer these questions. Since the early twentieth century, with few exceptions, glaciers around the world have been retreating at unprecedented rates. The IPCC assessment found that global warming will change the timing and amount of runoff, “affecting water storage and delivery infrastructure around the world,

Climate change has altered the frequency and magnitude of the natural hazards and this could be a reason for the disaster. Avalanches involving wet snow have increased while the rain on snow floods have also increased at lower elevations in springs. Mountain environments are very sensitive to climate change. They appear among the most severely and rapidly impacted ecosystems, and can be affected by any change in temperature and precipitation patterns at all scales Snow and ice are the main control parameters of the hydrological cycle, particularly of the seasonal runoff, and may impact the entire geosystem (rocks, soils, vegetation, and river discharges). With climate change, water will probably become less available, the consequences of which will reach far beyond mountain regions. Similarly, climate change is likely to increase exposure to either natural or economic hazards, all the more so because in many mountain areas, poverty levels are higher than in lowland areas and food insufficiency is more widespread

Satellite images do not show a glacial lake near the region, but there is a possibility that there may be a water pocket, or lake inside the glacier, in the region that may have erupted leading to the disaster. Water pockets are lakes inside the glaciers, which may have erupted leading to this event. A water hole in the bed of an intermittent stream occurs typically as a bowl at the foot of a cliff over which the stream leaps when in the flood stage.

The experts have given their opinion and we await for the final report. We need further analysis, weather reports and data to confirm if the above given causes  indeed was the case. But it raises an important questions on projects being declared in non-confirmative geographical areas to create such heavy projects as the sustainability of these projects is in question. It is very difficult to predict the stability of such projects. These areas often faces issues such as landslide and also the molten ice from the Himalayan hits the structures across the rivers. We await the final report from the authority.